It is no exaggeration to claim that Sally Potter and Tilda Swinton are heroines of cinema, and together, seven years of preparation and persuasion led to them finally making the sumptuous and majestic Orlando in 1992.

Adapted from the renowned Virginia Woolf novel, would it be inaccurate to claim Orlando as one of the most interesting fictional hero/ines of all time? He/she/they is certainly no ordinary character, never aging for 400 years and navigating the courts of Elizabeth I (played by Quentin Crisp), Charles II and eventually waking up as a woman to survive the stuffy Victorian age and the emerging 20th century.

In the role, Swinton defines her androgynous appeal, easily embodying the pixie-like Elizabethan courtier who encounters the patronage of the queen and yet is then absolutely feminine as she wakes as a restless female in the 18th century. Swinton’s facets of gender neutralise Orlando, making the character a symbol of non-conformity and gender fluidity. In one scene in which Orlando learns that she no longer has claim to her lands now that she is a woman, we see how through being transformed Orlando is nullified by her once contemporaries:

First Official: One, you are legally dead, and therefore cannot hold any property whatsoever.
Orlando: Ah. Fine.
First Official: Two, you are now a female.
Second Official: Which amounts to much the same thing. 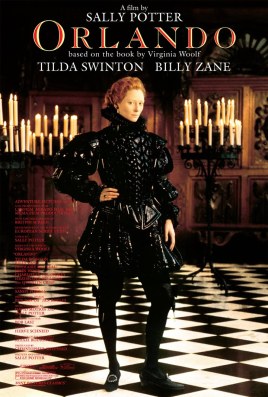 This ‘death’ (and/or her transformation into womanhood) is a catalyst for a sprawling epic tale already 200 years in the making. Interspersed with title cards such as ‘LOVE’, ‘DEATH’, ‘POETRY’, ‘POLITICS’ and ‘SEX’, Potter divides Orlando’s life into connecting scenes of incidences which together paint a portrait of a multi-generational protagonist, tasked with staying young forever and yet growing ever more mature in life experiences.

Some we know to be dead even though they walk among us; some are not yet born though they go through all the forms of life; other are hundreds of years old though they call themselves thirty-six. (Woolf, ‘Orlando’, 1928)

The film is magnificently cinematic. From the music, composed by David Motion, Sally Potter and Jimmy Somerville to the ornate costumes by Sandy Powell, it is amazing to learn this film actually struggled to find funding. The splendour of every frame is bewitching. The Jarman-esque quality of the narrative and style roots the film firmly in the early 1990s, not only characterised by its modernised ending, but in the film’s allegiance with the sexual revolution permeating culture and politics in the last decade of the century. A particular pleasure is Swinton’s fourth wall-breaking asides to the camera, which could be interpreted as a charming tribute to Woolf, whose own works were littered with addresses to the reader.

It’s true to say that I was completely mesmerised by this film. Entering into the phantasmagorical world of Orlando, a dreamlike, incongruous world where the constraints of gender, power and possession are swept along by a sequence of events as fantastic as they are allegorical.

A typically colourful report of Sally Potter dodging slates thrown from the roof of the old Bradford Odeon as she was escorted to the Media Museum by the festival co-director Neil Young was an amusing introduction to last night’s film. It’s good to know that no matter how utterly transformative cinema can be, in the instance of Orlando, you can always rely on being brought gently back to there world. When or wherever yours may be.