Earlier this year, Girl On Film (Evangeline Spachis) embarked on a research project to Paris with university. Fascinated by the rich cultural history of the French capital and the reverence which the French people place on ‘film as art’, Girl On Film decided to explore and capture the places which live on through the medium of cinema and ensure that Paris is an eternal heartbeat of cultural and cinematic importance.

The start of the tour was at the beginning of feature-length silent cinema itself. The Phantom of the Opera (1925) was an American production, set in the Opéra de Paris and based on the universally famous novel by Gaston Leroux. However there was one problem, the entire production was to be based in Hollywood. Persuaded by the increasing popularity of film and the epic nature of the story, Universal Studios built an exact replica of the Paris Opera House.

Inside the Paris Opera House today: 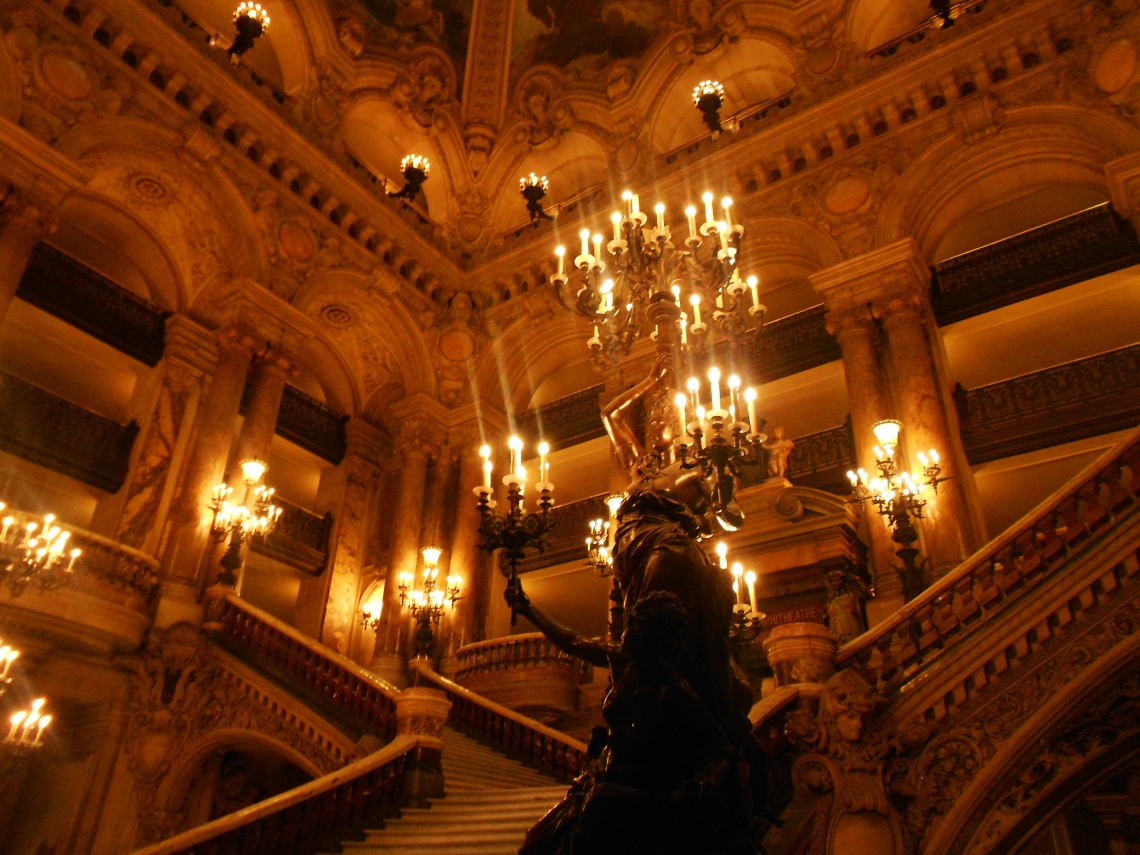 The Opera House is truly stunning. Steeped in history, high culture and baroque architecture, it is no wonder that it as become a place of legend and esteem throughout the art world. 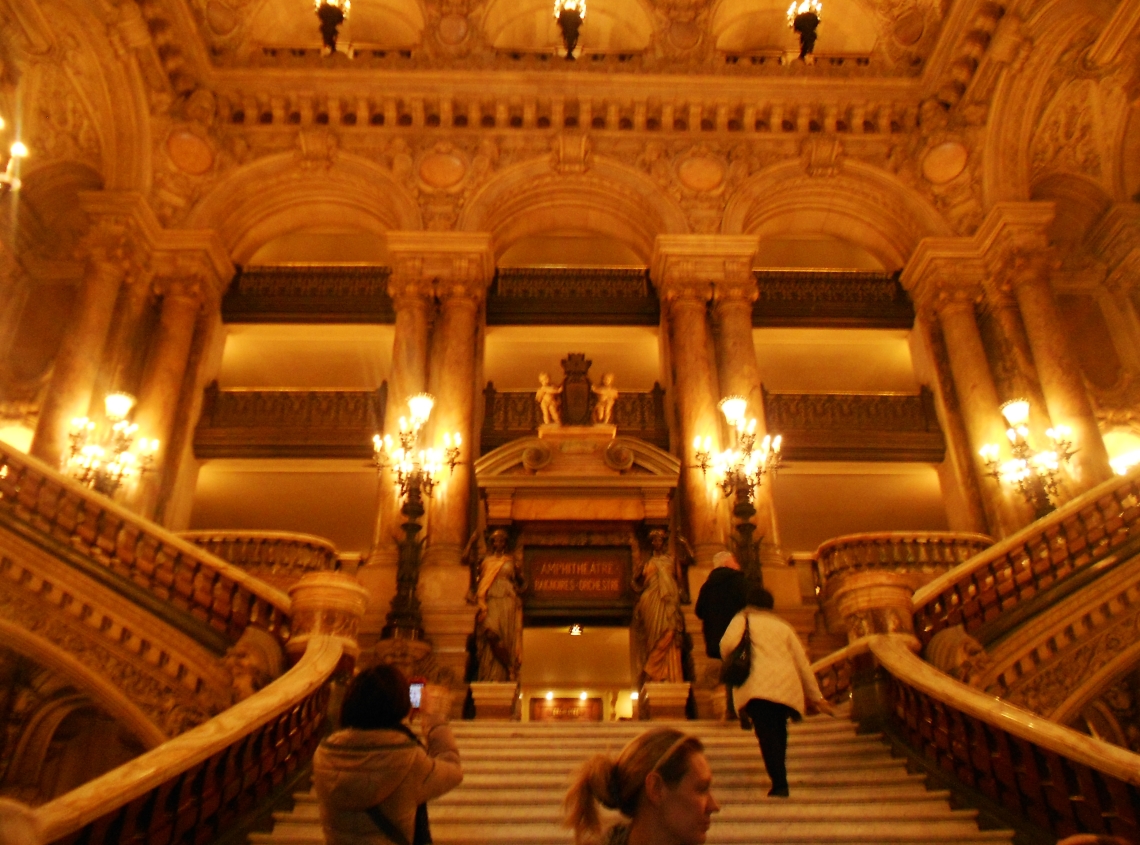 The 1925 silent film features a shot of the Hollywood version of the staircase amidst an extravagant ball scene.

Of course, the Phantom ‘ghost’ famously occupies the No. 5 box in the Opera House. 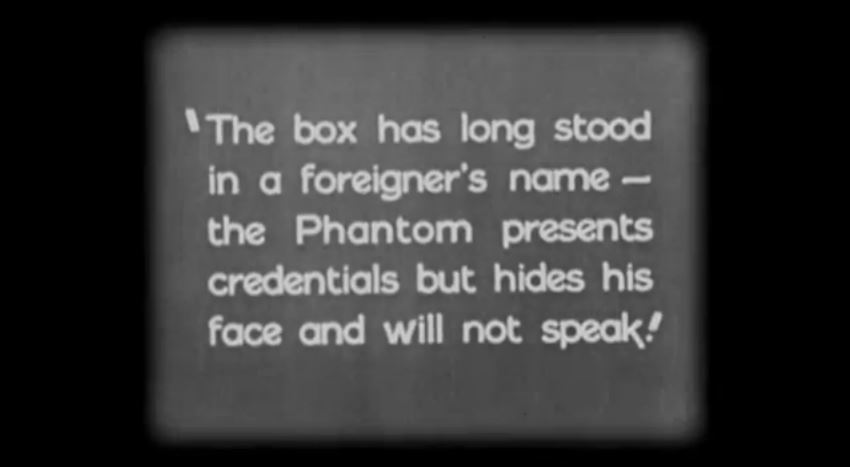 The box today has a haunting tribute to the immortal character:

Moulin Rouge is seemingly less glamorous by day than it’s silver screen namesake by director Baz Lurhmann would have you believe. 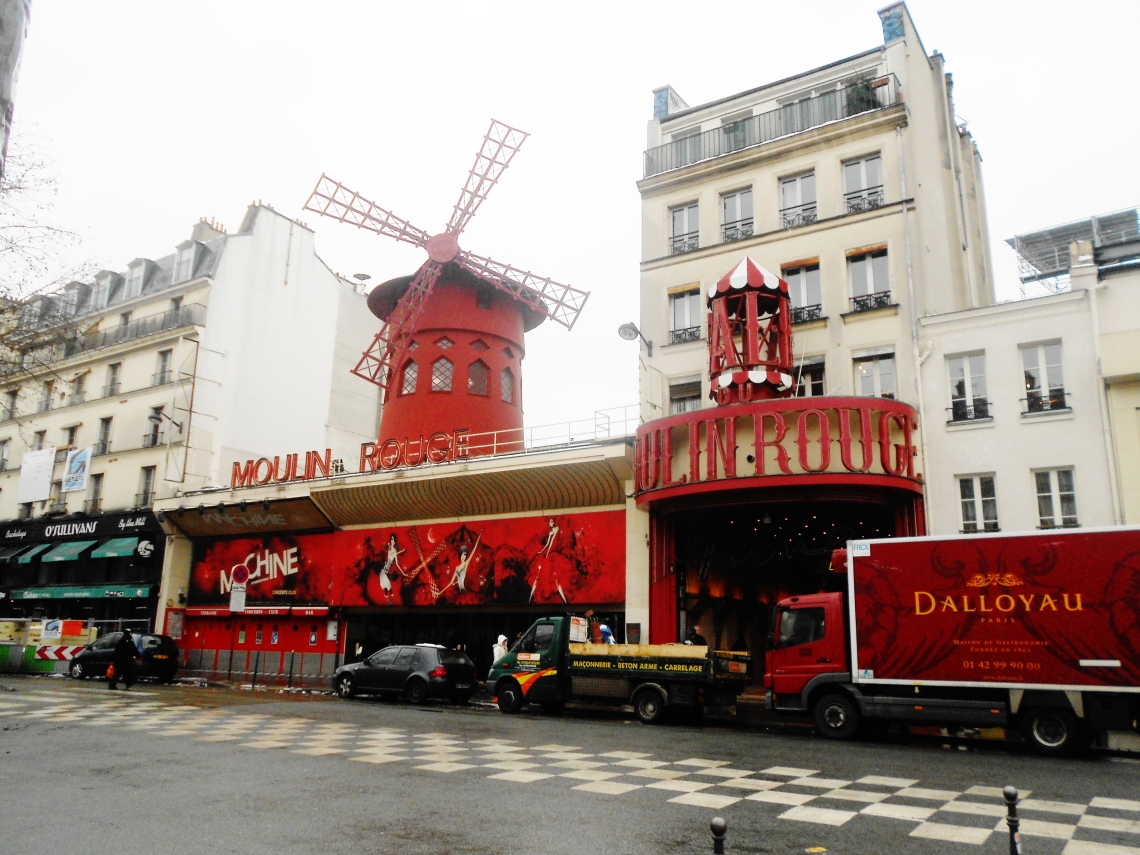 Moulin Rouge! (2001) is a romantic-drama-musical, and like The Phantom of the Opera (1925), captured the imagination of cinema-goers worldwide. A jukebox musical, it features modern pop songs by Elton John and Madonna amongst others which is both in direct contrast and in-sync with the early-20th century sensibilities of Paris. The ‘Fin de siècle’ vitality of this spirited French society plays straight into the hands of Lurhmann, a famously decadent and vivacious filmmaker. 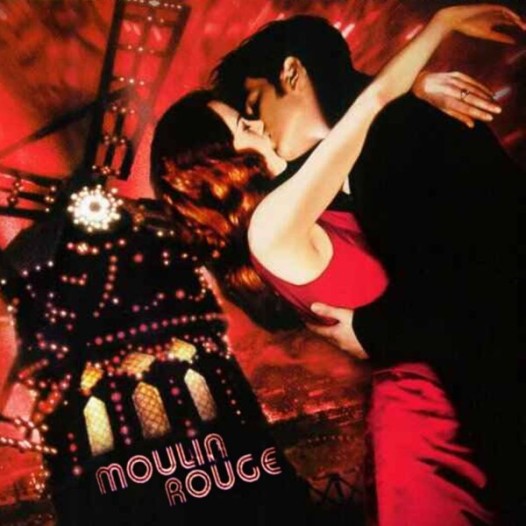 Mere metres along the road and we come to a café which features in a French-language film that continues to be one of the more accessible and crowd-pleasing depictions of Parisian life- Amélie (2001).

After the death of her mother and her father’s subsequent withdrawal from society, Amélie leaves home and becomes a waitress at Café de Deux Moulins in Montmartre, staffed and frequented by a collection of eccentrics. Spurning romantic relationships after a few disappointing efforts, she finds contentment in simple pleasures and letting her imagination roam free.

The Café de Deux Moulins (15 Rue Lepic, Montmartre) was a delightful place to visit as a film fan, and the owners clearly relish the popularity the establishment has procured due to the enduring affection for Amelié (2001).

A screenshot from the film within the restaurant itself.

The food wasn’t half bad either!

The fast-paced action film The Bourne Identity (2002) was US-financed and written by an American, but for the most part features the protagonist, Jason Bourne eluding the the C.I.A. and Interpol as he search for answers about his life after suffering from amnesia around the back-streets of Paris.

A significant and iconic action sequence sees Bourne (played by Matt Damon) return to his former Parisian apartment at which he is eventually ambushed by an assassin.

Given as “104 rue du Jardin”, the apartment is 104 Avenue Kléber, at rue de Longchamp, just north of Trocadero.

2004 saw the sequel to Before Sunrise (1995) (a tale of two back-packers who meet in Vienna and spend an evening together exploring the city and fall in love), Before Sunset (2004) being made. 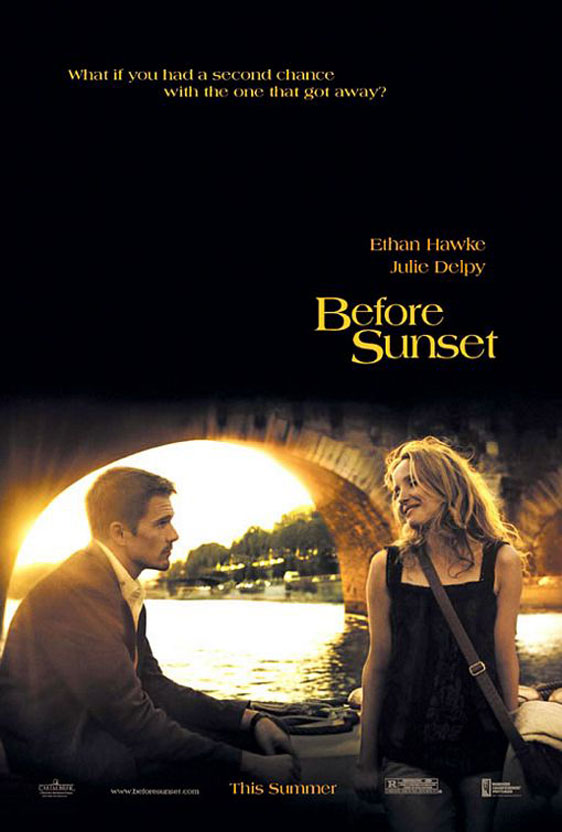 Set this time in Paris and ten years after the events of the first film, Jesse (Ethan Hawke) and Celine (Julie Delpy) reunite and experience a summer’s day in the city of lovers. Though the geography of the film and the reality of the locations are somewhat fiddled with, the film does begin with a chance meeting at the Shakespeare and Company bookshop, at which Jesse is giving a talk about his new book and Celine is looking through the bookshop window. 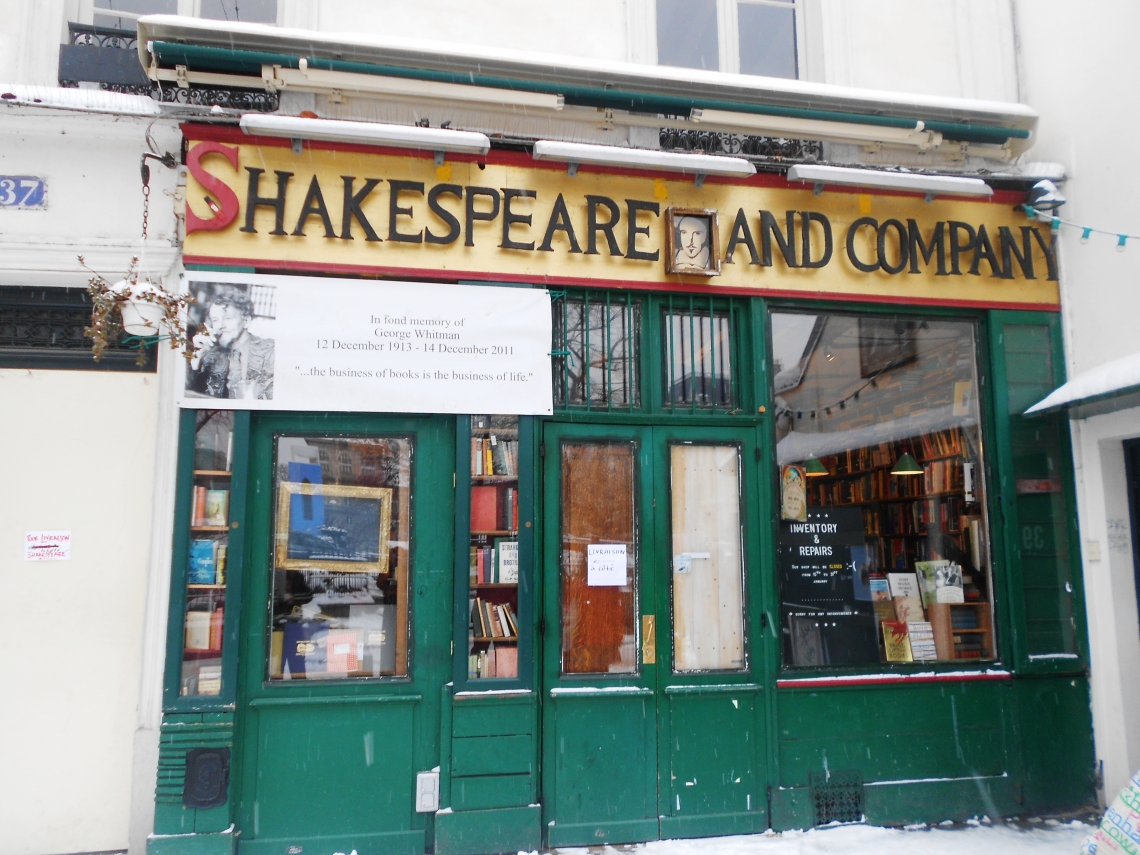 Shakespeare and Company, 37 rue de la Bucherie, on the Left Bank of the Seine opposite Notre Dame. The bookshop crops up again in another Parisian romance, Woody Allen’s Midnight In Paris (2011).

The Three Colours trilogy are a hugely important collection of French/Polish films which kick-started the popularity of French New Wave cinema once again in the nineties. Perhaps the most famous of the three, Trois Couleurs: Bleu (1993) is set in Paris and centres on Julie’s (Juliette Binoche) struggle to recover from a horrific accident which resulted in the death of her husband and a beloved young daughter. After suffering such a terrible trauma, she begins to devote the rest of her life trying to completely erase her past from her memory.

In one moving scene, Julie sits in a cafe and the camera shoots a tight close-up of a sugar cube absorbing coffee from her cup, representing her complete disinterest in life and her disregard for anything but the sugar or her internal grief.

Girl On Film attempted to recreate this scene in a Parisian cafe with mixed results.

All photos belong to Evangeline Spachis [2013]